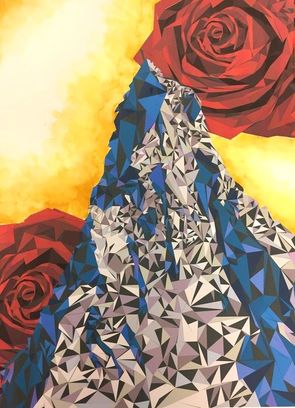 For this art piece I decided to represent the themes of the inevitability and non-permanent nature of death. In my piece I depicted a mountain with two roses behind it. The image also has a yellow “cloud of mustard gas” coming off of it. The roses and mountain are composed of individual triangles and polygons. I used the geometric shapes and variations in color to create the illusion of depth. Each had to be colored in differently to create the visual of the mountain and roses. Together the image is made up of more than two-thousand shapes. In Slaughterhouse Five the motif of mustard gas and roses is used, representing the contrast between something so deadly, mustard gas, and something so beautiful, roses. The motif was carried through my image to show that death has no escape but there were moments of beauty in life. The mountain is used to represent the mountain that Billy Pilgrim crashed into when he was in a plane. The crash left all but him dead. This mountain ended lives but the lives had beauty before the death. The depiction of these objects brought together my theme of inescapable but not concrete death.