With so many perspectives and ideas coming together to try to work cohesively, this project has been a whirlwind. Through this project my perspective has remained fairly constant. I came into this project as someone who dislikes assault style guns. I grew up in a family that hunts, meaning we had guns. This was something that I was comfortable with because I knew that the guns were being used in a careful and specific way, and they were not assault rifles.

​During our class discussions I would be very heated and passionate about my dislike of assault weapons. I would have to consciously make an effort to contain myself when talking about assault weapons. Those are the guns that I had most of a problem with. My views would be challenged frequently when discussing these types of weapons in class.  Because there were so many different perspectives being shared in this project, it was a challenging task to incorporate as many voices as possible.

We chose to make this exhibition one that showed information and facts without being highly biased. In this project I took a leadership role. I was part of a team who planned almost all of the exhibition. In this planning we had to conscientiously make sure that all voices were being heard. Along with planning, I formated all of the profiles displayed in the exhibition as well as assisting in the activism room. I felt that while there were many ups and downs in this project, it came together to create a strong, informative, and interesting exhibition. 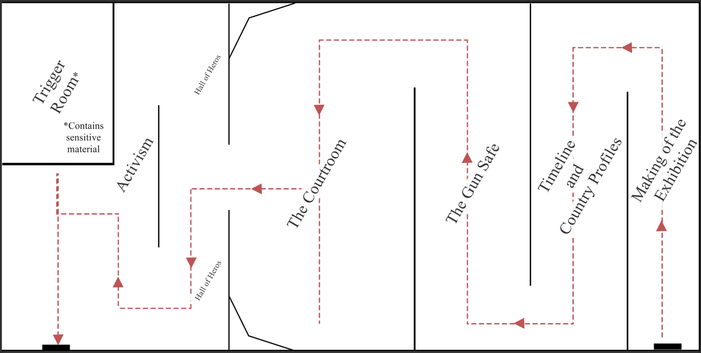 This the map of the exhibition that I created.